Down the hill from the Tower House, around the curve of Olive Street, was this cottage for sale, number 26. Painted red, it may be mentioned, like a ripe apple. And attached to the porch/deck area, a lovely long bridge, right over Hayden Brook, landing on the farthest end of the Lakewood Theater parking lot. How perfectly placed! This will be the tea house. A welcoming place to do all of the Sugar Tree sort of things, and it will also have one room set aside specifically for artist use.

Just for fun, because I enjoy the history so much, I have a partially compiled list of actors from the 1920's & 1930's who spent time at Lakewood Theater, and then 'went on' as they say, to other things.  Of course the most recognizable are Humphrey Bogart (1928, 29, 31, 35)  Groucho Marx (1934)  and Vincent Price (1937, 40)  but depending on a person's particular interest in theater and cinema, there are several other stand-out names

the "Tower House" at 4 Olive Street 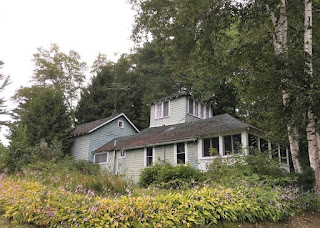 I've never before thought of restoring older houses to what they once were, but maybe I'd like to with this one, if I could.  Having grown up in love with the Lakewood Theater - my parents home neighboring Libby Mills and becoming friends of Henry & Twinny Richards, and occasional house guests of Fancher Swett.... there were never any shortage of Lakewood stories! -  I was always in search of memoribilia of the years of the past; and here was a whole house! I'm excited to own it now, and have plans to make it a part of the extended Lakewood community again.
This is the "Tower House" with the famous Dance Hall, where my vision for Olive Street will begin to take shape.

I can't give you better information about the house than what was written by Colin W. Sargent as "Wild Olive" and subtitled "Lakewood Theater Colony: a secret history" in the November 2018 issue of Portland Monthly  Below are some edited excerpts. Please read the entire article at:

If Lakewood Theater colony is the bathtub-gin martini, this rustic Victorian bungalow is the olive. If you love theater, parties, and lakeside living, [the house at] 4 Olive Street [will] get your heart pumping.

The 1,192-square-foot mini-resort [ ] features a three-story Italianate tower, [and] views of Lake Wesserunsett. Also conveying is a legend best told over cocktails.

Eric Pierce [ ] sensed magic the moment he stepped inside[.] he contacted Jenny Oby, author of Lakewood Theatre (Arcadia Publishing, 2017), about the structure also known as “The Dance Hall.”

“The Theater is on the north side of Hayden Brook,” she says.[ ]  Olive Street was named for Olive Hayden.

“[ ] at the back of the house, you’ll see what looks like old stagecoach doors facing the lake [ ] You’d have had to drive your horse or car around back to use them. Just above those three doors is just this gigantic open room. [ ]  If you look closer, “the separate double-wide entry stairs and door that faces the courtyard instead of the road” compound the mystery. If not for a limited-access speakeasy, what else could this possibly have been for?

Which brings us to a sexy little stream that separates this house from the Lakewood Theater Colony. [ ] Lakewood Theater Colony manager “Herbert Swett was determined to make and keep his theater and surroundings attractive to highbrow clientele in order to attract the best actors and actresses of the time, and to attract the most affluent visitors as well. The Dance Hall is a five-minute walk from the theater, and you have to cross a stream. Local legend has it that on the theater side of the stream, the theater had lots of rules for the actors and staff and housed them in gender separated housing. If you crossed the stream you were no longer under Swett’s ‘jurisdiction’ or the rules of the theater. There is no doubt in my mind that a lot of thirsty and bored actors, actresses, and patrons crossed that stream on a very regular basis to drink, to party, and get a little wild [ ].”

[ ] there’s a chance Humphrey Bogart dared to cross this stream—to stay at this bungalow possibly. [ ]. “During the course of the 1934 season, Mary Philips, then wife of Humphrey Bogart, had spent the early portion of the season at Lakewood while Bogart finished his run in The Petrified Forest. When Bogart arrived he went to Herbert Swett to request a private cottage for himself and his wife, but Swett, in all seriousness, suggested that Miss Philips stay in the cottage she had been sharing with Katherine Kidder, another member of the players, and that Bogart could move in with Sanford Cummings and Keenan Wynn, a suggestion which led Bogart to seek another landlord the next day.”

Though Bogart didn’t have much use for the tame side of life, we don’t have a drop of Prohibition proof that he and Mary actually relocated or partied at 4 Olive. It’s just wild conjecture about Wild Olive. To suggest otherwise would be crossing a different stream. Over there is the stuff that dreams are made of. 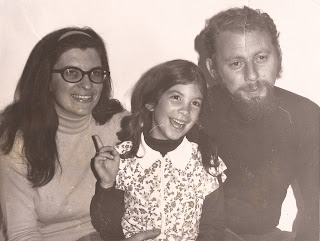 Photo of my parents and I, taken by Michael Mills at his mom's house, circa 1970-something.

Having Libby Mills as an across-the-street neighbor was a hoot.

Back in the day, as the phrase goes, this was quite the place. Much of my youth around Lakewood Theater was spent hearing stories of the stars, the parties... and the rumors. Rumors that left me wondering how many theater folk stayed up late swaping tales over a few illegal cocktails during prohibition at 4 Olive Street. The possibility of Mary Phillips & husband Humphrey Bogart having a twirl or two around the floorboards of the old dance hall. Thoughts of the students of the Skowhegan Art School making regular visits inspired by the activity and art encompassing the theater and it's guests. The whole vibe of bohemian secrets surrounding what has since been dubbed Wild Olive thrilled me.*

A little less youthful now, with many other adventures in the performing and visual arts having involved me and shaped me along my way -  including my son's personal interests in Lakewood Theater -  when the opportunity came to actually own land & cottages on Olive Street, with the imfamous dance hall as the center piece, my very first thought was to re-create an artist community here.

Just imagining the old dance hall alive again with music, and mini art shows. Space for personal work. Space for voice lessons, dancing, guitar. Learning the craft of set design, or sculpting, or stained glass mosaics, or watercolors... whatever folks may want to do or teach. Garden space for veggies as well as flowers. A common kitchen for Lakewood Theater actors and thier families to make and share meals before or after rehersals and shows if they wish, a hot shower, and comfortable rooms to rest in; just like the bungalos and the inn of old where traveling theater companies stayed a season at a time and made a community of it.

Thusly, my vision for Olive Street is to make it a re-created/re-awakened art & theater community.

Right now I just have so many wonderful ideas for this place, and know it will be a journey to get there. Keep up to date on how it's going by following this blog. Certainly however it shapes itself, I am fortunate to have my husband and my son supporting the vision along the way, and this is their public thank you!  - Dawnella Sutton

*You must understand, my relationship with Lakewood Theater began in the days when all those actors' photos lined the walls, I thought drinking Shirley Temples made me the height of sophistication, and when Van Johnson came to perform I still couldn't believe he didn't choose to stay in Brigadoon with Gene Kelly.  By the time I heard the Wild Olive stories I was rife with a bohemian vibe myself. 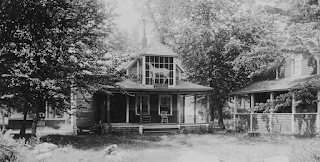 Mission Statement for Olive Street: to bring art and creativity to Olive Street; to make it a destination alongside Lakewood Theater: to support the theater and its people: and to be an ongoing self-sustaining project.

This blog was created to share snippets of the journey, and more importantly, for the opportunity to have others to engage with us in helping re-create & re-awaken an artists' community across the brook from the historic Lakewood Theater. Artists and benefactors of all kinds are most warmly welcomed.