Tonight is opening night of the first show of the season!

Two nuns at the Sisters of Perpetual Sewing have been secretly making wine to keep the convent’s doors open, but Paul and Sally, reporters and former fiancées, are hot on their trail. They go undercover as a nun and priest, but their presence, combined with the addition of a new nun, spur paranoia throughout the convent that a spy has been sent from Rome to shut them down. Wine and secrets are inevitably spilled as everyone tries to preserve the convent and reconnect with lost loves. Accusations, mistaken identities, and romances run wild in this traditional, laugh-out-loud farce.

Tickets can be purchased online by clicking here, at the box office during open hours, or by calling 474- 7176 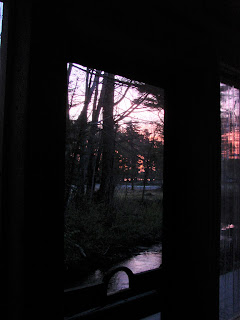 Watching the beautiful sun rise over Lakewood Theater from my porch* with my cup of tea & the cat.

Colton Bagley is returning to the costume shop to lend his talent, and will also be found waiting tables at the Lakewood Inn Restaurant.

August Thornton returns to our stage -  you may remember him from  Mid-Summer and  Living on Love in 2021 -  and can be seen in  The Girl on the Train  playing June 9th - 18th, and  Great Expectations which runs September 1st - 10th.  He will be one of your waiters at the Inn as well.

Travis Harden is making his debut on the Lakewood Theater stage, in The Girl on the Train.

Tucker Atwood & Autumn Stupica are going to be staying in the Perkins House again this season. Autumn will be making her Lakewood debut in Critic's Choice  which runs June 23rd - July 2nd, and will also be in  Anything to Declare  September 15th - 24th. . Tucker can be seen in  The Drowsy Chaperone  July 7th - 16th,  and  Anything to Declare.

Arriving later this season, MJ Clifford & Willow-the-cat will be my very honored guests at the Sugar Tree Cottage again, with MJ performing in  Halfway There  July 21st - July 30th while Willow keeps an eye on the cottage and soaks up some sun: and then returning for Great Expectations.

Looking forward to the 2022 Season!

*The theater building itself may be hidden from view in the photo by the porch screen door frame in this photo, but it is surely there, standing fast. One of the benefits of being at the cottage through the late autumn to early springtime is the view during and following abscission, through the time of budding. 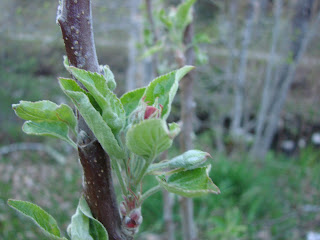 We have planted six apple trees - four on the little hill behind the Perkins House, and two beside the Brook House - on Olive Street and it's exciting to see them bud! We have two Pink Lady, a Cortland, a Gala, and an Empire. The start of a tiny orchard.

This beautiful spot of deep pink is, appropriately it would seem, on one of the Pink Lady varieties. Can't wait for the blossoms!

The gardens and flower beds are not put in yet for the year, but in makes my heart sing to see these begin their journey!